Marriage at an all time low 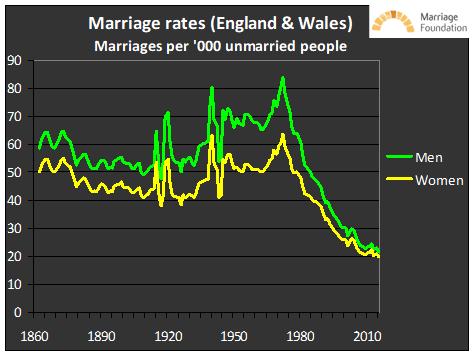 Today’s release from the Office for National Statistics reveals that marriage has hit an all-time low. The number of weddings in 2015 was 239,020, down 3.4 per cent on the previous year. Marriage rates, the proportion of unmarried people who marry in any given year, are now at their lowest level since records began, more […]

More men than women waiting to meet “the one”

Theme for Marriage Week – Think Ahead!

There’s a very simple equation. Less marriage = more unmarried cohabitation = more family instability The reason is that marriage is inherently stable whereas cohabitation is inherently unstable. Study after study shows that this remains the case even when you’ve taken into account all of the background factors that make people more or less likely […]

Plan your baby if you want to stay together, finds Marriage Foundation

PRESS RELEASE FROM MARRIAGE FOUNDATION Date: 06 February 2018 Plan your baby if you want to stay together, finds Marriage Foundation Couples who plan their first pregnancy have a higher chance of staying together long-term than those who do not, a new study from Marriage Foundation has found. Under a fifth (18 per cent) of […]

Children should know …  … The upsides of healthy relationships When relationships go right, couples who stay together tend to be happier, healthier and ultimately wealthier (Waite & Gallagher 2000) Conversely when relationships go wrong, couple distress is strongly linked to problems with individual health and well-being (Lebow et al 2012) The children of […]