Most cohabiting dads did pretty well during lockdown. Many of their partners did not.  One of the more striking findings from our analysis of 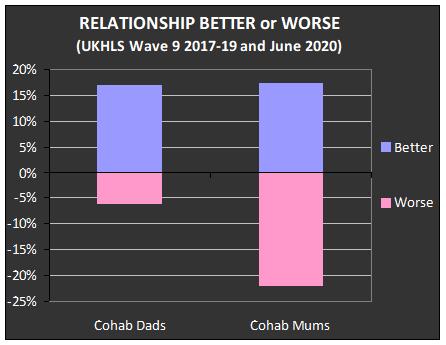 Most cohabiting dads did pretty well during lockdown. Many of their partners did not.

One of the more striking findings from our analysis of relationships during lockdown is the way unmarried mums and dads appear to have experienced it very differently.

My colleague Professor Steve McKay and I compared what 386 cohabiting parents said about their relationships in June – two and a half months into lockdown – with what parents said in more normal times a year or two beforehand.

This huge divergence between cohabiting mums and dads was most apparent in the questions about conflict. 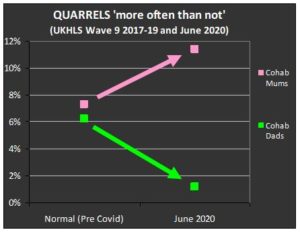 Despite all this – just like their married counterparts – two thirds fewer unmarried fathers and mothers than normal said they’d often thought about splitting up.

So what is going on? Why have so many more cohabiting mums than dads said their relationship got worse and they argued more during the first lockdown?

I think the answer boils down to commitment. Mum and dad are not on the same page.

It’s well established that unmarried parents as a group are far more likely to split up than married parents. And commitment theory suggests not being married means there may be less clarity and more ambiguity about the relationship.

We’ve also seen in a couple of studies that where there is a mismatch in commitment, more often than not its the man who is less committed and the woman more committed.

So let’s take that mismatched couple who’ve not married and never quite made their plans crystal clear. They still live together and have a baby and, for her, this is it. But for him, he’s never quite bought in. Yes, their relationship has been fine so far. But he’s never made the mental leap from living together now to living together forever.

Deep down, both of them know this and it puts pressure on their relationship. She wants him to commit to her for life but he likes to keep his options open and dodges the issue as much as possible.

In normal times, this means that they as a typical cohabiting couple tend to have more arguments than a typical married couple.

Then along comes lockdown and suddenly they are stuck together in the same house or flat.

He quite likes this arrangement because he knows it’s not permanent. But it seems to take the pressure off him for the time being.

For her, lockdown highlights her frustrations even more. The lack of security and clarity grates and she resents it. His ambiguity and lack of clarity gets on her nerves more and every conversation feels like a quarrel.

Despite this, neither of them are thinking about splitting up. He doesn’t want to break the status quo. She still wants him to  make that lifelong promise even though he’s driving her mad at the moment.

I suspect this is about right. Mum and dad are not on the same page. But if I’m wrong, we still have to explain why unmarried mums and dads viewed lockdown so differently.