Half of today’s newlyweds will celebrate their ruby anniversary together

The average marriage can now expect to last 40 years, before ending in either divorce or death, according to our new analysis, reported in 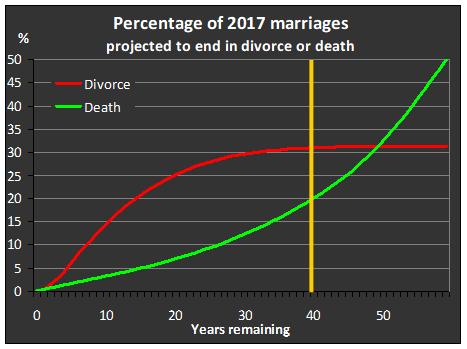 The average marriage can now expect to last 40 years, before ending in either divorce or death, according to our new analysis, reported in the Sunday Times

And among the half of all today’s newlyweds who will celebrate their ruby wedding, it will be ‘until death do us part’ for 99 per cent of them.

But I thought divorce rates were sky high?

Almost all divorce happens before couples reach their 30th anniversary. So if couples who married in the late 1980s were ever going to divorce, almost all have now done so. Because we know how many of them have divorced already, we can accurately project their final lifetime divorce rate to be around 44 per cent.

So yes, that still sounds high.

Yeah but divorce rates are rising

Nope! The good news is that divorce rates are falling and today’s newlyweds are doing considerably better than the late 1980s couples.

That’s a third fewer divorces for the 2008 couples and nearly a half fewer for couples marrying today.

We project that the lifetime divorce rate for today’s newlyweds will be 31 per cent, a big improvement on 44 per cent.

Plug these numbers into the model used by Office for National Statistics and that’s how we find that half of marriages will last 40 years or more.

Why are divorce rates falling?

The simple fact is that fewer wives are filing for divorce in their first decade of marriage. By comparison, there’s been almost no change in the rate that husbands file for divorce all the way back to the 1970s.

Changes in economics or household work patterns aren’t much help in explaining this. Because more women are now in the workplace, then you might expect more pressure on relationships at home. Studies suggest dual earner couples tend to have higher divorce rates than single earner couples. Either of these explanations suggest divorce rates should have risen. But they haven’t. They’ve fallen, and only among women.

There are really only two possible explanations for the gender effect.

The first is that women have become more tolerant of their husbands. That just doesn’t sound plausible in an era of #metoo. You’d think more – not fewer – wives would be leaving their husbands. But they are not.

The second is that husbands are making their wives happier so that they don’t leave. As social and family pressure for couples to get married has disappeared, so those men who marry are more committed, more intentional. They are ‘deciders’ rather than ‘sliders’.

OK, but why do I read that the average marriage lasts 12 years?

That’s only for couples who divorce. Half of all divorces happen before 12 years. Half happen after 12 years, So the average (median) length of marriages that end in divorce is 12 years.

Half of all marriages will end within 40 years, the majority through divorce rather than death.

But the other half of all marriages will celebrate their ruby wedding anniversary. Almost all of these will end only when one spouse dies.

And that, thankfully, is a long way off for most people.