It’s not just Brexit. Britain is also a nation divided over marriage. The better off marry and mostly stay together. The less well off 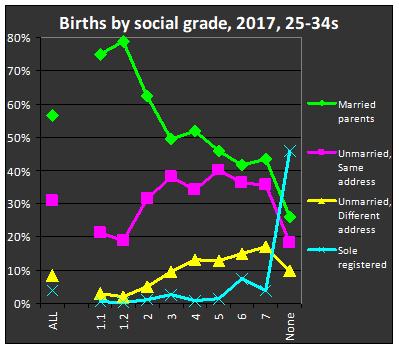 Britain is also a nation divided over marriage.

The better off marry and mostly stay together. The less well off don’t marry and face a much higher risk of splitting up.

New figures out from the Office for National Statistics show that the vast majority of parents start off as a couple, presumably with intent to stay that way.

Among parents who had a baby in 2017, 85 per cent lived together when their child was born.

But the split emerges in who marries and who doesn’t.

Among the highest income groups, most couples with newborns are married. Three quarters of mothers in managerial or professional positions are married.

In this better-off group, marriage is alive and well and in no real sign of retreat.

However in the middle and lower income groups, fewer than half of new mothers under 35 are married. And here, marriage continues to retreat, with marriages rates down in some groups by as much as 5 per cent within just the last three years.

Government policy has actively encouraged this divide since the introduction of tax credits in 2004. The infamous ‘couple penalty’ makes lower income couples thousands of pounds per year better off if they live apart – or pretend to – and don’t get married.

A few years ago, we highlighted the evidence that showed the effectiveness of this perverse bribe: hundreds of thousands more people were claiming lone parent tax credits than there were lone parents.

Under universal credit, the problem will be even worse.

How many more years will we have to wait before government wakes up to the reality that it’s policies penalise marriage among the poorest, make family breakdown pay, and thus thoroughly undermine commitment and stability?