Home » Blog » The ‘burning injustice’ that the poor no longer marry

Harry and Meghan have just done it. His older brother did it a few years ago. Some of his cousins have done it. And his 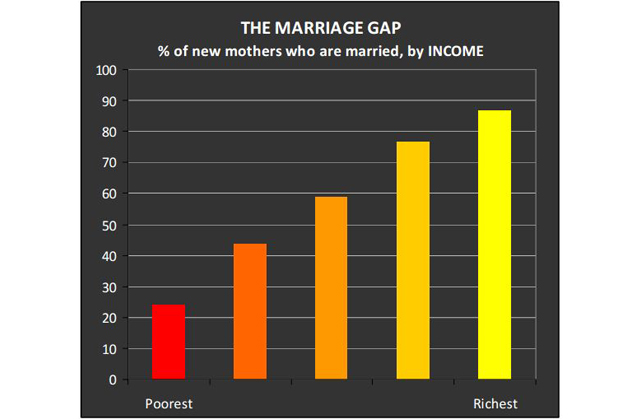 Harry and Meghan have just done it. His older brother did it a few years ago. Some of his cousins have done it. And his father has even done it twice.

Indeed it would be considered quite odd if Prince Harry and Meghan Markle hadn’t got married. Royal weddings and marriages are a bit of a tradition. Marriage is what they do.

But is that all there is to it? Has marriage been relegated to little more than a tradition?

It’s certainly the case that many people today would ask why they bother. After all, you can live together and have children perfectly well without getting married. Half of all babies are now born to parents who haven’t got married.

It wasn’t so long ago that anybody who became parents got married, even if shotgun. Up until the 1960s, 95 per cent of children were born to married parents.

Everybody married. And there was an important reason for this. Few women would be prepared to take the chance of sleeping with a man who hadn’t already shown signs of sticking around while they brought up the inevitable children that resulted. Few families would be willing to put up with a man who wanted sex without commitment.

Birth control changed the game. At first it was just a few oddballs who said no to marriage. But gradually unmarried cohabitation became normalised to the point that it is today.

But aside from the Royals, one very large group has stuck with marriage. It’s the rich. Actually it’s more or less anyone in the top income quintile, those in white collar jobs and a few blue collar workers who are earning over £40,000 per year. Almost nine out of ten of this group are married by the time they have young children. For them the trend away from marriage has barely happened. Broadly speaking, this remains the case right across Europe, including Scandinavia.

Yet down at the bottom end of the scale, among those in the lowest income quintile, just 24 per cent of parents with young children are married. The poorest, those with fewest financial and social resources, have abandoned marriage in their droves.

Remember this is true right across the income scale. In the early years of parenthood for example, my colleague Professor Steve McKay and I found that the poorest of married parents were as likely to stay together as all but the richest of cohabiting parents.

Why do so few of the poorest families marry? The cost of a wedding is a barrier that is more perceived than real. Weddings don’t have to be over-the-top royal occasions, as indeed they weren’t when marriage was universal. What is very real is a perverse welfare system that pays couples thousands not to marry. And that financial disincentive is then reinforced by a message from our policymakers and media – most of whom married – that being married isn’t really necessary anyway.

So the poorest families who already face the greatest challenge in bringing up their children with the fewest resources have somehow been persuaded that marriage doesn’t matter – and then heavily bribed not to do so – by the very same people who are all married. All but four of current Cabinet members and two thirds of the shadow cabinet are married.

It’s a classic case of do as I say and not as I do. Look no further than a gentleman named Clegg if you want to find a prime example of such hypocrisy. He is married, of course.

No wonder we have such an epidemic of teenage mental health problems. No wonder London is experiencing a wave of knife crime from disaffected youth. Even if the specific research linking these two event has yet to be done, the hypothesis is clear. Family breakdown and fatherlessness is already linked with problem behaviour among boys. Half of all young offenders come through the care system and a majority from broken homes.

It should be a straightforward argument. If we want a safer, healthier, better adjusted society, we need fewer broken families. Commitment – and therefore marriage – bonds families together and tends to produce the best outcomes for kids.

The rich know this. Our politicians – and journalists and civil servants – know this. The Royal family know this.

So when will we hear Mrs May or Mr Khan on the Today programme talking about the ‘burning injustice’ of why the poor no longer marry?