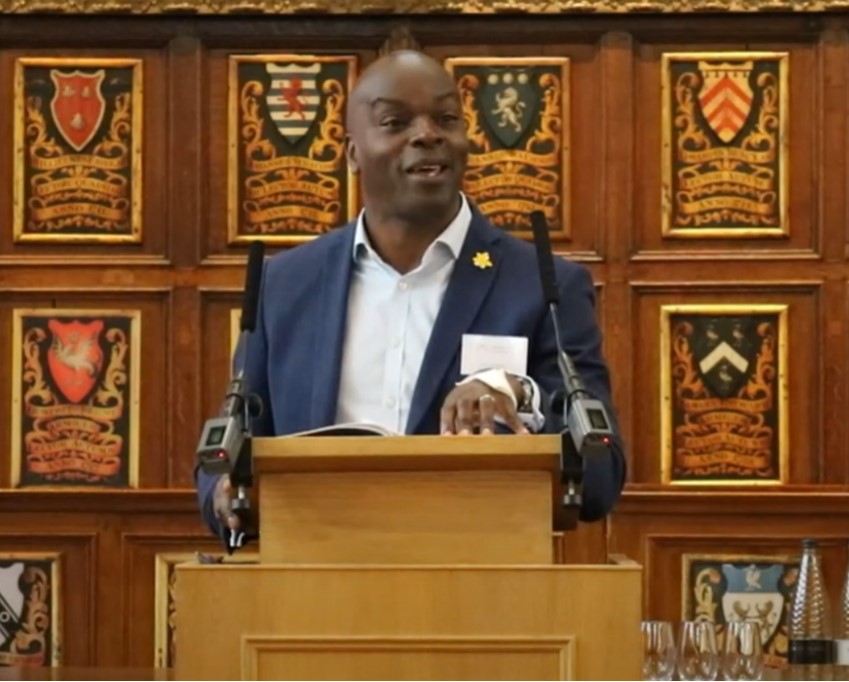 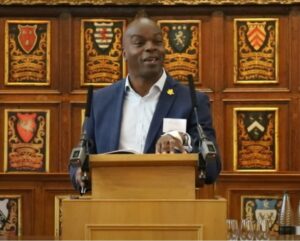 I am stood here today because quite frankly I’m astonished that other politicians don’t speak about marriage publicly in a positive way. As a politician there are many things that you try to body swerve because they’re just not worth the effort. But I’m astonished that marriage is seen as one of them. Even if a person has no feelings about the positive outcomes of marriage they don’t generally attack you for feeling that way.

I come from a community that gave up on marriage probably a century ago. But of course we’ve had the single worst social outcomes for that entire century. So I have a very personal understanding of what a lack of marriage does for your community. I happen to be of West Indian origin. My parents are Jamaican. The number of children from that community who grow up in a one-parent family is over 56 percent. That’s a very old figure but if you surveyed it now it’d be significantly larger. And why that is important because of course children who come from single parent families are far more likely to grow up in poverty and have far less adult interactions to regulate their behaviour.

I’ll give you a statistic that is outside of our conversation today but I think is directly related and shows you why politicians should be talking about marriage. The black community in London only makes up 13 per cent of the population but when it comes to knife crime we make up 57 of the victims and just about 70 per cent of the perpetrators. Now when you look at the social benefits of marriage I guarantee you if marriage was a bigger feature in our community those numbers would be significantly smaller.

So I come from a poor single parent family in west london struggling in all the ways that single parent families struggle. Now of course I could tell you about the financial struggle but I imagine that’s actually fairly obvious. But the other struggle that I can contrast against my life now. I’m married to Ellie. We’ve been married for 17 years. All of our dramas look entirely different to the dramas I had growing up. They are the same dramas but they have a different approach and a different outcome. It’s simply because I have an ally. I have an adult in my house who’s more concerned about my welfare than I am. I have an adult in the house who I can palm off … I want to say 50 but it’s probably about … 80 percent of the child caring duties. But the point is if I have a trouble we are in it together. The social, emotional, psychological, societal and financial impact of that partnership is beyond measure. There is a reason that married people – particularly married men, because men are largely useless on their own – do better. I don’t have to tell you that married people spend less time in hospital, less time in jail, make more money and pay more taxes. So from that angle alone politicians should be shouting this from the rooftops. This isn’t a moral crusade. For me it is personally. But for other politicians it doesn’t need to be. This is about the viability of Britain plc

I’ll give you another underlying fact to consider. We have a housing crisis. It is most acute in London. One of the major drivers behind that housing crisis is single person households. How’s that come about? Family breakdown. We spend 23 billion annually on housing rent subsidy. That figure will only go up if we don’t address this.

We’ve just come through a pandemic where one of the real outcomes has been the poor mental health of our children. And I think the important point to make here is that it isn’t the pandemic that gave them that outcome. It’s their lives to that pandemic. Because when you start to break those figures down you see that certain parts of society and certain children did absolutely wonderfully because their parents were doing wonderfully.

And I remember once my grandmother who will be a recurring theme in this talk said to me “children are only as good as their parents”. I said “what do you mean”. She said “if I’m happy you’re happy”. And I put out “but you’re not my parents”. She said “but I’m your parents’ parents”. It’s all about dynasty.

My big ambition – to remain married

So when you ask yourself why a young black boy from Ladbroke Grove who’s routinely been told that marriage does not work, is not relevant, and never happens in our community, made it my number one priority to become married. And then when I stood for parliament and a BBC journalist asked me what is my big ambition – I look back and I think he was referring to did I want to become prime minister – but my answer was to remain married. He was stunned he’s like what do you mean i said my big ambition is to remain married and it comes directly from my grandmother because my grandmother used to talk about dynasty and she said my role is to love and care for you your mom’s role is to feed you and care for you your role is to become a decent man find someone to marry and repeat the service and that’s the key thing

Marriage is a choice

What this talk is not about. It’s not about a judgment call on anybody else’s lifestyle. It’s not about making people feel bad. I don’t need to grade the different level of family. But what I do want to tell you is that marriage is the gold standard. I don’t want to tell you that people should be compelled to be married. Because one of the greatest things about marriage is it’s a choice. It only works because it’s a choice. Compulsion will devalue marriage. The reason I’m stood here with Marriage Foundation is when I saw their reaction to no-fault divorce. That showed me this is a bunch of people who really understand what it is they’re talking about. Marriage is great because you’re there because you want to be.

Marriage is the gold standard across cultures

Let me tell you what this is about. It is about the emotional, psychological, sociological, epidemiological impacts of marriage. It’s also about the financial and the moral impacts of marriage: all positive I might add. This is a demonstration of the difference between married people and cohabiting. So when I use the words “gold standard” that’s not something that I’ve come up with. It’s not an impression I have. It is a statistical fact. Marriage is the gold standard of people being together. What’s very interesting is that it is planet wide. Many if not all cultures respect marriage. Sikh. Muslim. Jewish. Christian. Atheist. All of those communities respect marriage because they’ve done the same survey that my grandmother had done and that survey was experience.

The biggest thing I want to talk about today is the social gap in marriage. To show you how stark the gap is, 87 per cent of people who earn over 43 000 pounds are married. 87 percent. Just 24 per cent of people were married much lower down the income brackets. That’s really important because they are the people who suffer the poor social outcomes and they’re the people who most need to change their social outcomes.